According to the latest figures released by the International Renewable Energy Agency (IRENA) in its seventh edition of Renewable Energy and Jobs  – Annual Review,  jobs in the renewable energy sector reached 11.5 million globally last year, led by solar PV with 3.8 million jobs amounting to a third of the total.

IRENA finds that renewable energy employment has continued to grow worldwide since 2012 when it began to assess it on an annual basis.

The report shows that the solar PV industry retains the top spot, with 33% of the total renewable energy workforce. 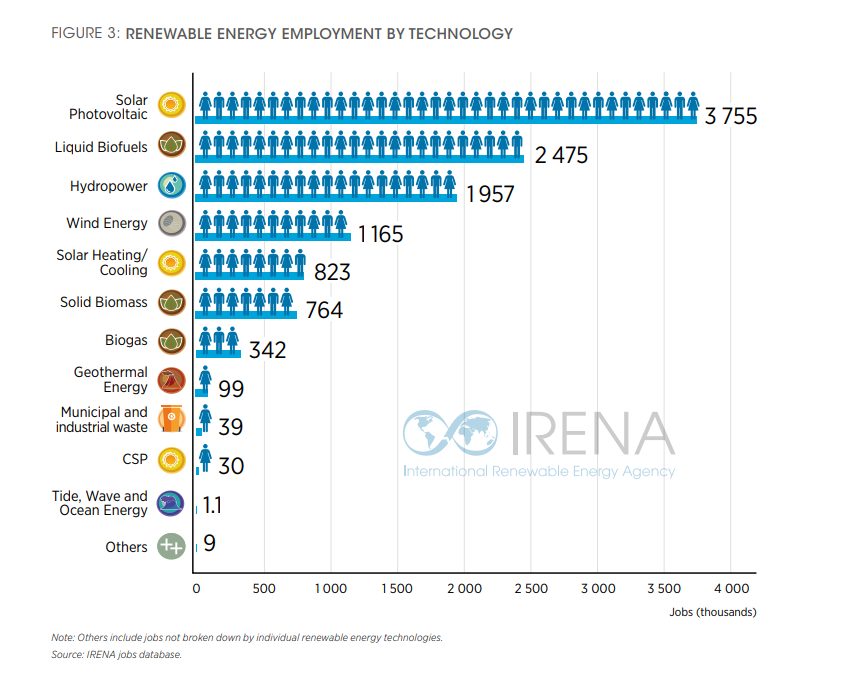 IRENA estimates that 83% of the total global solar PV jobs were created in Asia, followed by North America’s 6.5% share, Europe’s 4.4% and Africa’s 3.7%.  China, the leading producer of PV equipment and the world’s largest installation market accounted for more than half of PV employment worldwide or some 2.2 million jobs.

In 2019, 87% of global PV employment was concentrated in the ten countries that lead in worldwide deployment and in the production of equipment.

Already, renewable energy employment reflects the emergence of innovative technologies. Solar photovoltaics (PV) – a segment that looked almost avant-garde just a decade ago – accounts today for some 3.8 million jobs, or nearly a third of the sector total. Growing shares of those jobs are off-grid, supporting productive use in farming, food processing and healthcare in previously remote, isolated, energy-poor communities. In parallel, rural areas benefit from the feedstock production that underpins bioenergy and which accounts for the bulk of about 3.6 million jobs in that segment

EY announces Matthew Skidmore of CS Energy as an Entrepreneur Of The Year 2020...
Scroll to top