The Asian Development Bank (ADB) announced that it has approved a $7.64 million loan to support the construction of a 100-megawatt (MW) solar power park in Cambodia, which will help the country develop renewable energy resources, diversify its energy mix, and improve the competitiveness of its economy.

In addition to ADB’s loan, the financing package for the National Solar Park Project includes an $11 million loan and a $3 million grant from the Strategic Climate Fund, specifically through the Scaling Up Renewable Energy Program. Also included is a $500,000 technical assistance grant provided by the Republic of Korea e-Asia and Knowledge Partnership Fund to support the capacity development of Electricite du Cambodge (EDC), Cambodia’s national electricity utility, as well as the Electricity Authority of Cambodia, the national electricity regulator, in solar photovoltaic technology and solar park planning. ADB will administer these resources. The project was prepared with grants from the governments of Canada and Singapore.

“Having reliable, sustainable, and affordable energy sources is crucial for the economic development of a rapidly expanding country such as Cambodia. ADB’s assistance will not only help diversify Cambodia’s energy mix through solar power development, but also help the country meet its greenhouse gas emissions reductions target, as per the Paris climate agreement.”

Despite significant progress in developing the country’s power network, nearly 5 million Cambodians still lack access to electricity. In 2018, Cambodia’s installed electricity capacity totaled nearly 2,175 MW, with hydropower accounting for 1,330 MW, or about 62%, and fossil fuels-based generation accounting for 780 MW or about 36%. Despite having an abundance of solar radiation, current solar generation capacity in the country is only 10 MW. ADB’s studies show that Cambodia can add about 200 MW of solar energy to the grid by 2021, using available technology and without disrupting the grid.

The National Solar Park Project will enable EDC to construct a 100-MW capacity solar power park and other related facilities, including access roads, fencing, and drainage systems, in Kampong Chhnang Province. The project will also build a transmission system connecting to the main grid near Phnom Penh, which will allow the project to supply power to the national grid.

The solar power plants that will be part of the 100-MW solar park will be bid out to independent power producers in two phases, with the first phase aimed at a capacity of 60 MW. ADB’s Office of Public–Private Partnership is working as a transaction advisor to assist EDC to design and conduct an open and competitive bidding process. 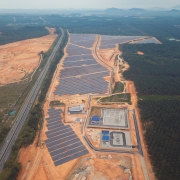 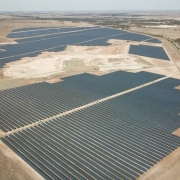 Costs for renewable energy technologies decreased to a record low in 2018, IRENA...
Scroll to top