Australian engineering, procurement and construction firm, Epho Pty Ltd, announced that the 5.725MW solar system for Brisbane Airport Corporation in Australia has now officially come online. Whilst Australia’s largest commercial and industrial solar system has been operational since end of 2018, Epho Pty Ltd, which was reponsible for the  project design and construction, announced on May 10 that the systems reached practical completion including all approvals from authorities.

Trina Solar provided the panels,  which have an anti-glare coating that meets the requirements of aviation regulators, for five of the six sites.

“The 20,937 solar panels used in this project were spread across six sites at the airport – some were ground mounted solar panels and others were rooftop mounted. If you lay the 20,937 solar panels flat, they take up more than twice the size of the Melbourne Cricket Ground. Brisbane Airport is the most challenging project we have done, but it puts us in good stead for other airport and large commercial & industrial solar projects in the future as we have experience dealing with the various authorities.”

One of the unique requirements that airports have is for the solar panels to have minimal glare.

“In this instance, we came up with solutions that were in line with international best practices. This instilled confidence in the Australian civil aviation authority, because they knew we were committed to safety on all matters regarding the installation. We chose Trina Solar as our main module supplier because they are known for providing high-quality modules. Trina Solar also helped us significantly in the bidding process. Trina Solar has a proven track record and investment-grade bankability.”

“This 5.725MW installation is the largest airport solar deployment in Australia and shows that Australia is truly at the forefront globally of such large-scale commercial installations.”

Brisbane Airport’s energy consumption peaks during the day when the solar installation is also performing at its peak output.

“This is another reason why solar energy is a natural choice for airports and other commercial and industrial enterprises.”

“Solar energy is very worthwhile for airports, because adopting solar is in line with the worldwide push, by organizations such as Airports Council International, to reduce airports’ carbon footprint. Airports can reduce their dependence on the electricity grid considerably because they generally have a lot of land and rooftop space where solar panels can be installed.”

Govind Kant added that Epho did its own quality assurance tests of the product, prior to installation, and was very pleased with the results, as the Trina Solar panels clearly met the high standards required.

Photo Credit: © Nearmap Australia Pty Ltd. Brisbane Airport captured on 3 November, 2018. Work on the airport’s second runway began in 2012, and is set to open in 2020. 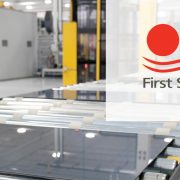 Tesvolt is putting into operation Europe’s first gigafactory for battery...

China’s GS-Solar to aquire a majority stake in Panasonic’s Malaysian...
Scroll to top