Until now, acreage was designated for either photovoltaics or photosynthesis, that is, to generate electricity or grow crops. An agrophotovoltaics (APV) pilot project near Lake Constance in Germany, however, has now demonstrated that both uses are compatible. Dual use of land is resource efficient, reduces competition for land and additionally opens up a new source of income for farmers.

For one year, the largest APV system in Germany is being tested on the Demeter farm cooperative Heggelbach. In the demonstration project “Agrophotovoltaic – Resource Efficient Land Use (APV-Resola)” led by the Fraunhofer Institute for Solar Energy Systems ISE, solar modules for electricity production are installed directly above crops covering an area of one third hectare. Now the first solar harvest of power and produce has been collected on both levels.

© Photo Hofgemeinschaft Heggelbach The first grain harvest of the APV system is being gathered.

“The project results from the first year are a complete success: The agrophotovoltaic system proved suitable for the practice and costs as much as a small solar roof system. The crop production is sufficiently high and can be profitably sold on the market,” explains Stephan Schindele, project manager of agrophotovoltaics at Fraunhofer ISE.

“Agrophotovoltaics (APV) has the potential to open up new space that is urgently needed for the PV expansion in Germany. At the same time APV can mitigate the conflicting interests between agriculture and open space PV systems for viable land. Before market readiness, however, other sectors and differently sized systems still must be tested. Also, the technical integration must be further advanced, for example, the implementation of storage,” remarks Prof. Hans-Martin Henning, Institute Director of Fraunhofer ISE.

Winter wheat, potatoes, celeriac and clover grass were the first crops to be tested. The south-west orientation and the extra distance between the five meter high rows of bifacial glass-glass PV modules ensured that the crops were exposed to uniform solar radiation.

The results from the first harvest were, for the most part, promising. “The crop yield of clover grass under the PV array was only 5.3 percent less than the reference plot,” reports Prof. Petera Högy, agricultural expert at the University of Hohenheim. The yield losses for potatoes, wheat and celeriac are between 18 to 19 percent and therefore somewhat higher.”

“From the perspective of agricultural science, agrophotovoltaics is a promising solution for increasing both the land use efficiency and the share of renewable energy provided by the agricultural sector,” stresses Prof. Iris Lewandowski, Head of the Department of Biobased Products and Energy Crops, University of Hohenheim. The experts agree that it is important, however, to gather more experience over the next few years and analyze other crops before making final conclusions.

© Photo BayWa r.e. renewable energy / Fraunhofer ISE In summer, the electricity demand of the farm was almost completely covered by the PV array.

Solar Array Produces More Than Average
The 720 bifacial solar modules produce solar electricity not only on the front side but on the back of the photovoltaic modules with solar radiation reflected from the surroundings. Under favorable ambient conditions, e.g. snow cover, twenty five percent additional electricity yield can be achieved. From an energetic stand point, the dual use principle of agrophotovoltaics is much more efficient than solely planting energy crops, accounting, after all, for 18 percent of agricultural land use in Germany.

With an installed power of 194 kilowatts, the photovoltaic array can supply 62 four-person households with electricity. In the first twelve months, the array produced 1266 kilowatt-hours electricity per installed kilowatt, one third more than the average value of 950 kWh/kW in Germany.

The power production from the experimental field matched well to the daily farm load. About 40 percent of the electricity produced on the farm was used directly to charge the electric vehicles and process the harvested crops. In summer, the load demand could be almost completely met by the photovoltaic system. Thomas Schmid and the other Demeter farmers aim to increase their self-consumption up to 70 percent by optimizing their consumption behavior and installing an electricity storage system. The surplus PV electricity is fed into the Elektrizitätswerke Schönau, an electric utility company based on 100% renewable energy and a partner in the project.

© Photo Fraunhofer ISE
The electricity produced by the APV plant is both self-consumed as well as fed into the grid.

Agrophotovoltaic – Resource Efficient Land Use (APV Resola) Project
Since the idea of agrophotovoltaics was first initiated by Prof. Adolf Goetzberger, who founded Fraunhofer ISE in 1981, several large APV plants have been installed worldwide. On the other hand, only a few of these APV plants are designated as research sites. In the “APV Resola” project, researchers are investigating the economic, technical, societal and ecological aspects of the technology in a pilot plant under real conditions for the first time. The research project is supported by funds from the German Federal Ministry of Education and Research (BMBF) and the Research for Sustainable Development (FONA).

The project goal is to develop APV system technology into a market-ready product. “In order to provide the necessary proof-of-concept before market entry, we need to compare further techno-economical applications of APV, demonstrate the transferability to other regional areas and also realize larger systems,” explains Stephan Schindele. For example, different possible applications shall be explored in combination with fruit, berries, hops and wine crops and with the various technologies such as energy storage, special films with organic solar cells and solar PV water treatment systems.

“Besides investment from industry and research policy, appropriate political measures supporting the technology are of vital importance for a successful market entry,” adds Stephan Schindele. Already in 2014, Fraunhofer ISE and the Wuppertal Institute, supported in tandem by the University of Hohenheim, made a joint statement proposing that agrophotovoltaics be considered separately in invitations for tender while in the test phase. 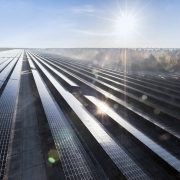