Figures released on yesterday by utility solar authority Wiki-Solar.org show that global capacity of large-scale PV generating capacity exceeded 60 GW at the end of 2015. More than 22 GW of new plants were commissioned in 2015, setting a sixth consecutive annual record.

Just over half of the new capacity in the year was installed in Asia, led by China and India. North America showed another strong year, with Europe now a distant third. South America enjoyed growth of some 60%, thanks to Chile supported by new entrants in Central America; while South Africa continues to lead the way in the African continent; and Australia is just starting to feature.

“A buoyant start to 2016 suggests this high growth will continue. Substantial pipelines in India, the USA and Chile – together with emerging markets like Brazil and the Philippines – point to yet another record year. It is entirely possible we will see over 100 GW of installed capacity by the end of the year.”

“As ever, the biggest unknown is China, where there is little visibility of the forward pipeline, and the six-monthly historical figures often reveal substantial unexpected new capacity.”

The Chinese figures are ever more significant as it is now the unchallenged leader of the national league table with almost 1/3 of the total world capacity of utility-scale solar generating capacity:

These results are based on data published by the end of February 2016. Wiki-Solar emphasises that the figures tend to creep further upwards as later information is published. 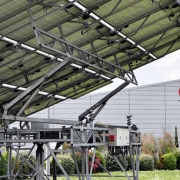