The 6.1-megawatt build-own-operate-transfer (BOOT) wheeling agreement will generate more than 13 gigawatt-hours of clean energy in the first year of operation, meeting 40% of ASEZA’s energy needs and reducing carbon emissions by 9,500 tonnes annually.

As the BOOT solar provider, Yellow Door Energy will invest in, design, construct, commission, operate and maintain the solar park. Located in Aqaba in southern Jordan, the solar park will comprise of over 15,000 photovoltaic modules and will start operating by the summer of 2020.

“Our organization’s objectives are to enhance the economic activity of ASEZA and contribute to the preservation of the Jordanian environment. Our BOOT solar agreement with Yellow Door Energy helps us achieve both economic and environmental objectives: We reduce our energy costs by more than 70% and significantly lower our carbon emissions.”

“We are proud to support ASEZA in their sustainability endeavors while helping them reduce energy costs. The Aqaba solar park demonstrates ASEZA’s sustainability leadership and we hope it will encourage other economic zones to switch to clean energy.”

Jordan is a leader in the Middle East for its rapid adoption of renewable energy. By 2020, one-fifth of the country’s energy will be generated through renewables, as stated by His Majesty King Abdullah II of Jordan at the World Economic Forum on the Middle East and North Africa in April 2019. 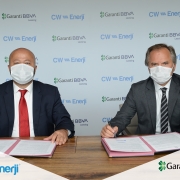 Photon Energy grows its global portfolio to 57.1 MW with the commissioning of eight solar PV plants in Hungary