Pivot Energy worked with individual landowners and local Illinois communities across the state to develop projects that were submitted, and eventually awarded through the Adjustable Block Lottery Program. The company will continue to work with local community members to further develop the projects which are expected to break ground this summer, with some beginning operation as soon as the end of the year.

The projects will provide clean and affordable solar energy to the local communities in which they are based, and combined, are estimated to generate enough electricity to power approximately 4,500 rural and urban households across Illinois.

“We opened our regional office in Chicago in 2017 with the vision to expand access to solar energy for all Illinoisans and contribute to the state’s clean energy economy. These awards will help solidify that long-term commitment to the local communities and support our mission of accelerating the shift to clean energy in communities across the nation.”

Pivot Energy has been operating in Illinois since 2012, developing both residential and commercial-scale projects for a multitude of clients in both the private and public sector. To date, the company has installed nearly 90 total solar projects across the state, comprised of both rooftop and ground-mounted systems.

Global market for solar and wind monitoring is expected to reach $82.9 billion in cumulative revenue by 2028, Navigant Research reports 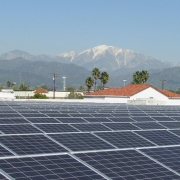 Siemens selected by Department of Energy for $6.4 Million project to strengthen...