New ‘GCC Power Market’ report produced by construction research firm Ventures Onsite for the Middle East Electricity (MEE) annual international power industry event,  states that the Gulf Cooperation Council (GCC) is expected to require a combined US $131 billion worth of investment in electricity generation, transmission and distribution over the next five years to cope with increasing demand from growing populations, expanding economies and climatic changes.

@venturesonsite is the official Construction Intelligence Partner for @meelectricity . We collaborated with MEE to create an overview of the GCC power industry in 2018! Take a look… https://t.co/HiFZktt8xh

The report notes that GCC countries are investing heavily on renewable energy to achieve significant  targets by 2030-2040. According to Masdar Institute experts, GCC countries are expected to procure power from renewable sources by 2050 to address climate change. In the GCC alone, which accounts for 47% of MENA generating capacity, US$ 316 billion  of renewables investments are needed by 2020, according to Informa Energy Group.

It adds that the GCC government has prioritised renewable energy targets and plans into their policies and frameworks. There has been a strong focus  on solar power as the region’s climate is best suited for its deployment According  to Frost & Sullivan, the GCC regions installed solar capacity is forecast to reach 76 CW by 2020.

The report also reveals that despite the GCC’s current power-generating capacity of 157 Gigawatts (GW) – which equates to 43 per cent of all Middle East and North Africa capacity – its six states will still require US $ 81bn investment for another 62 GW of increased capacity and US$ 50bn for additional transmission and distribution.

The report says much of the investment is likely to come from public-private partnerships (PPP) if a regulatory framework is introduced to incentivise independent power producers (IPP).

Over the last two decades, the PPP model has become the most attractive financing mechanism for the GCC power market with the model helping to ease the strain on government finances in delivering complex engineering solutions and delivering advanced technology solutions. The report outlines reliance on IPPs will grow but warns:

“According to industry experts, there also arises the need for the power sector to establish a regulatory framework to push for the private sector’s participation.”

“GCC governments need to ensure that IPPs play a larger role in power generation and not be looked upon as a short-term fix to increasing demand.”

Such is the demand for change, that the Global Smart Energy Summit (GSES) – which will debut alongside Middle East Electricity (MEE)  2018 – has a track dedicated to reforms, policy and incentives where regional and international industry leaders will look for tomorrow’s financing and partnership solutions.

“There will be keen debate on energy models needed to fuel economic growth, including policy reform needed to accelerate the global transition to smart energy. This includes a review of successful policy rethinks from around the world. It will be a track that could well set a course for the region’s power industry future.”

The trend towards change within the regional power sector has delivered a significant boost to Middle East Electricity (MEE)  with the 2018 event, running at the Dubai World Trade Centre from March 6-8, attracting over 1,000 exhibitors from 66 countries and 24 country pavilions so far, all demonstrating technology, systems and processes aimed at making the sector more efficient, productive, cost-effective and sustainable.

And to respond to changing demand, show organiser Informa Exhibitions has introduced a dedicated Energy Storage & Management Solutions to join its four other specialised sectors: Transmission & Distribution, Power Generation and Lighting stalwarts, as well as Solar, which joins the MEE fold as a dedicated sector after six years as a co-located event.

EDF announced as speaker at CSP Focus Mena 2018 in Morocco 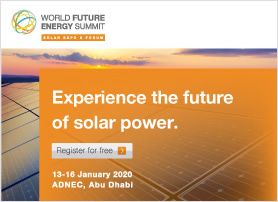