Business information provider IHS Markit  announced on December 14 that global photovoltaic (PV) demand is forecast to reach 108 gigawatts (GW) in 2018, largely driven by an improvement in the outlook in China, according to the latest edition of its PV Demand Market Tracker.  IHS Markit expects strong demand from the Chinese market to continue on the back of strong policy support, a successful transition to a more diverse market and strong momentum in the distributed-PV (DPV) sector.

“Exceeding 108 gigawatts of PV installations is close to the top-end of what can be achieved, based on the global polysilicon manufacturing capacity. Supply will therefore be tight throughout the first half of the year at least, resulting in stable to higher prices across the supply chain.”

According to the latest edition of its PV Demand Market Tracker, global installations will likely be shaped by PV module supply and pricing.

“Short supply and higher-than-anticipated module prices in the first half of 2018 will impede many markets outside China, due to worsening project economics. Projects in some regions might be delayed or even canceled, because market prices are higher than were estimated during the planning phase.”

In a marked change from the past, Chinese PV module suppliers are now prioritizing their domestic market. At one time China represented one of the lowest-priced PV markets, but after prices increased in 2017, China became an attractive market for local manufacturers. As a result, supply to other regions is restricted when demand in China is strong. 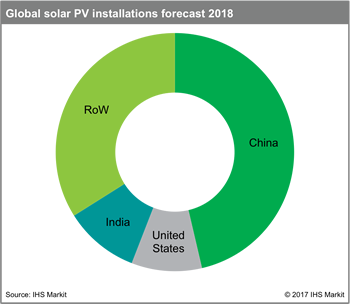 In addition to the expected shortfall in PV modules, following are the two most important factors influencing the PV outlook outside of China next year: 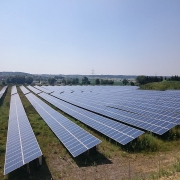