This marks a major milestone in a factory retooling that began just under one year ago, and included approximately $177 million in capital investment.

In late November of 2016, as a response to the highly competitive and dynamic PV market environment and customer demand for higher efficiency modules, First Solar made a strategic decision to accelerate development and production of Series 6.

The new line is expected to be producing commercial products by early in the second quarter of 2018, and will have an annualized output of 600MWdc when operating at full capacity.

Series 6 is anticipated to enter the commercial market with a power rating of 420-445 watts and conversion efficiency of over 17 percent. Measuring approximately 2 meters by 1.2 meters, Series 6 modules will provide more watts per lift than comparable crystalline silicon solar panels, and can be installed on virtually any ground-based PV mounting system.

“This is an extraordinary accomplishment, by any measure. Last November, we were in full Series 4 production mode. Since our decision at the end of 2016 to rapidly transition to Series 6, we’ve hit every incremental target with precision. We are absolutely delighted to be on track for delivery of commercial product early next year.”

Widmar added that First Solar will continue to maintain some Series 4 production at the Kulim plant as long as economic global demand calls for the product.

Expansion of production facility in Vietnam

Also during the meeting with analysts, First Solar announced it is expanding its production facility in Vietnam, essentially doubling production capacity of the initial site, which is still under construction. Annualized production capacity in Vietnam, when fully operational, will be 2.4GWdc. This, in combination with Perrysburg and facilities in Kulim, Malaysia, will give First Solar a total Series 6 manufacturing capacity of approximately 5.4GWdc by 2020, and represents approximately $1.4 billion in capital investment. 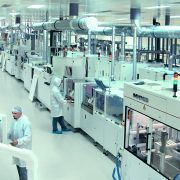