Amazon Web Services (AWS), an Amazon.com company announced past Wednesday that it has teamed with Community Energy to support the construction and operation of an 80 megawatt (MW) solar farm in Accomack County, Virginia, called Amazon Solar Farm US East.

This new solar farm is expected to start generating approximately 170,000 megawatt hours (MWh) of solar power annually as early as October 2016, or the equivalent of that used by approximately 15,000 US homes in a year.

Amazon Solar Farm US East will be the largest solar farm in the state of Virginia, with all energy generated delivered into the electrical grids that supply both current and future AWS Cloud datacenters.

In November 2014, AWS shared its long-term commitment to achieve 100 percent renewable energy usage for the global AWS infrastructure footprint. As of April 2015, AWS announced that approximately 25 percent of the power consumed by its global infrastructure comes from renewable energy sources with an interim goal of increasing that percentage to at least 40 percent by the end of 2016.

The Power Purchase Agreement (PPA) for Amazon Solar Farm US East follows a similar PPA for Amazon Wind Farm (Fowler Ridge) in Benton County, Indiana, that was announced in January 2015 and is expected to generate approximately 500,000 MWh of wind power annually. Both represent key steps toward meeting these goals.

“We continue to make significant progress towards our long-term commitment to power the global AWS infrastructure with 100 percent renewable energy. Amazon Solar Farm US East, the second PPA that will serve both existing and planned AWS datacenters in the central and eastern US, has the added benefit of working to increase the availability of renewable energy in the Commonwealth of Virginia.”

“Amazon’s new solar project will create good jobs on the Eastern Shore and generate more clean, renewable energy to fuel the new Virginia economy. I look forward to working with Amazon and Accomack to get this project online as we continue our efforts to make Virginia a global leader in the renewable energy sector.”

“We are pleased to work with Amazon Web Services to build the largest solar farm in Virginia and one of the largest east of the Mississippi. This project, which wouldn’t have been possible without AWS’ leadership, helps accelerate the commercialization and deployment of solar photovoltaic (PV) technologies at scale in Virginia.” 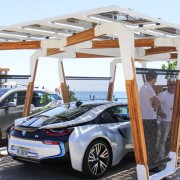 Siemens selected by Department of Energy for $6.4 Million project to strengthen the resilience U.S. electricity grid

The Winners of the InterSolar Europe Award 2015 in the Categories of Photovoltaics...