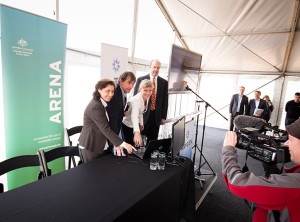 The pilot plant will provide performance data that can be used for the development of a commercial scale CSPV unit including efficiency, long term reliability and operations and maintenance data.

Completion of the project will place RayGen in a position where it has developed and demonstrated the essential CSPV technology, processes and knowledge base to enable a successful commercialisation phase.

The project is a key step toward reducing the cost of commercial concentrating solar power to the point where it can compete with traditional carbon-based energy without subsidies.

ARENA supported the $3.6 million project with $1.7 million of funding. The Victorian Government provided a $1 million grant for the initial field testing which paved the way for completion of the Newbridge plant.

The event featured also the signing of a Memorandum of Understanding with RayGen’s commercial partner, Juye Solar, for an additional capital investment of $6 million. The funding injection will enable RayGen to boost its manufacturing capacity. Juye Solar will invest a further $15 million for the development of RayGen’s offering in China.

Given the rapid transition to solar in developing markets like China and India, and based on the sale of one gigawatt into those markets, RayGen would create 500 direct jobs in Victoria in engineering, R&D, high-tech manufacturing and head office roles over the next five years. A further 500 new construction jobs across regional Australia would result from the domestic deployment of 250 megawatts.

The CSPV plant is a breakthrough for the Melbourne-based company ahead of the global deployment of utility-scale power stations, starting with a 10 megawatt facility in China by August 2016.

RayGen has pioneered the development of ground-breaking CSPV technology which is capable of producing the world’s lowest-cost energy. The company recently set the world record in collaboration with the University of New South Wales (UNSW) for the conversion of sunlight into electricity. At more than 40% system efficiency, the result puts solar ahead of fossil fuels for the first time.

When fully operational, the grid-connected plant at Newbridge will supply 200 kilowatts of power to Victorian agricultural company, Scato Plus.

“The need to fulfil new energy demand requirements, along with the replacement of retired generation assets, will call for an estimated $10 trillion of investment by 2030 solely on new generation sources. The International Energy Agency estimates that around two-thirds of this will be in developing countries, and solar will take the lion’s share. Australia is capable of commercialising – in a big way – world-leading technology innovation.”

Cart also added that the global energy industry was in the midst of its most dramatic transformation ever, creating the biggest market opportunity in history.